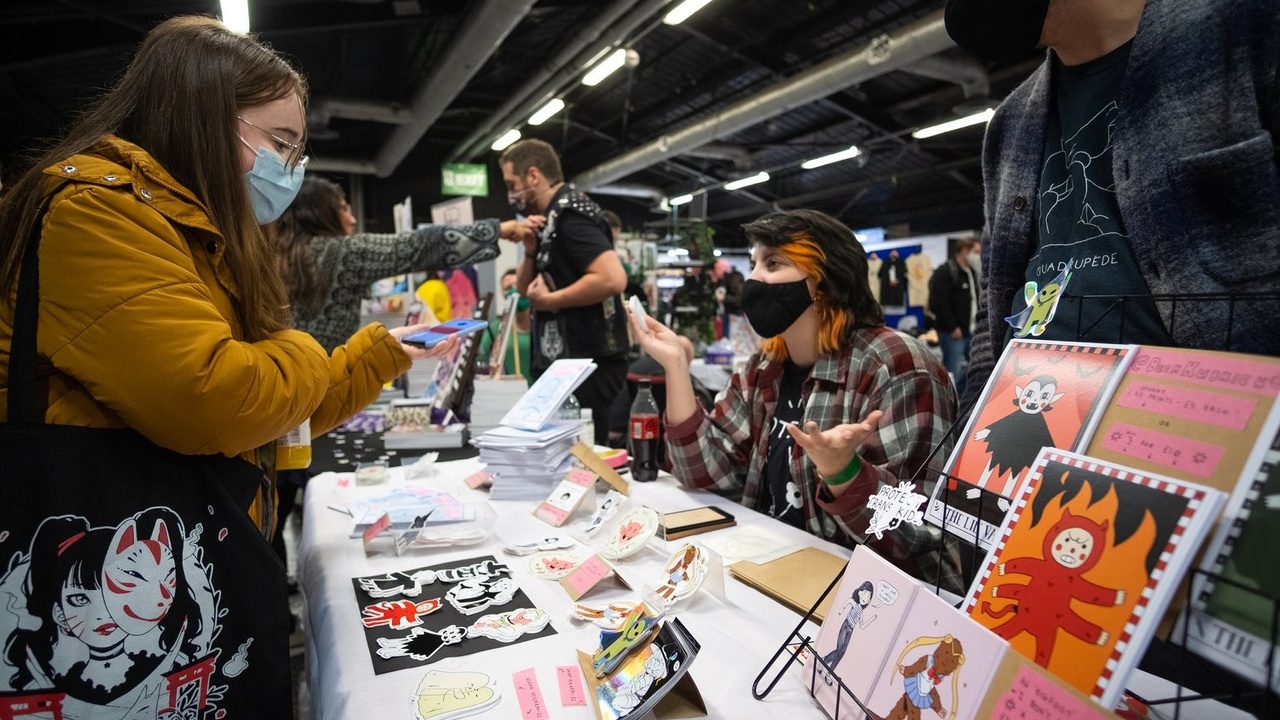 Guest writer Heather Tins leads us through everything you need to know about Thought Bubble, the largest comic art convention in the UK since 2007.

What is Thought Bubble?

Thought Bubble is arguably the largest comic art convention in the UK. The festival has been running since 2007 and continues to grow. The festival now spans a full week and takes place in several locations across Leeds City Centre. It is run by Thought Bubble LTD a not-for-profit company.

Where is Thought Bubble?

The weekend comic-con took place in several marquees with more than 5 minutes walk between them.

We parked up in the Trinity Centre car park which was a 10 minute walk to the Town Hall and cost just over £10 to park for most of the day, which for a city centre car park I felt was very reasonable.

If you are heading to the festival on the train it is only a ten minute walk to the Town Hall and the Leeds bus station is around 15 minutes away.

What does Thought Bubble cost?

Thought Bubble was very easy to navigate! If you pre order your tickets, you swap the tickets for wristbands outside the Town Hall. There was an arguably rather small ticket booth but plenty of Thought Bubble volunteers in the vicinity, who could take the tickets so not everyone was queuing at once!

Thought Bubble navigation was a breeze, upon getting the wristbands the team gave us maps and programmes; which showed cash points, toilets, where the marquees where and any need to know information. There is no app available for the event but the information provided was more than plentiful.

A bit lacking in the food and drink department. There were a few food vans outside the gallery and town hall but that was pretty much it! There are many restaurants and pubs in Leeds City Centre but not much in choice for on-site food and drinks. Which is not ideal if you are in cosplay and don’t want to go and sit with other shoppers for a quick bit of lunch!!

We ended up eating back at the Trinity center where there is a big food court and several chain restaurants.

Moneywise, most exhibitors took both card or cash! But I always prefer cash so I can keep an eye on what I am spending. That didn’t stop me from having to visit a cash point half way through though. Thankfully the maps included where you could get cash from around the festival which was very helpful!

Bare in mind that the exhibitors mainly use paypal card readers which run off wifi so if there is not any internet connection or if it is spotty it is not always that reliable!

Coming to the festival in full cosplay mode? There are cloakrooms/changing rooms located in Millennium Square at the Town Hall. Thought Bubble adheres to the same rules as many cons in terms of what you can/ can not wear;

–          Any costumes replicating military/police must be identifiable as a costume. Impersonation is illegal!

–          Nothing that could cause injury, and edges must be properly finished

–          Props and fake weapons are allowed in the festival but may not be approved inside convention halls/marquees. You may need to store these in the cloakroom (there is a small charge)

Lower ground of the Leeds City museum was Bubs lounge. A Quiet space developed in partnership with Leeds Autism Services. It featured soft furnishings and reduced sensory activities, open to all.

Predictably Thought Bubble was busy. There were many crowds but the festival was impeccably well managed. You may have to shuffle round people here and there but the marquees were spacious and didn’t feel too crowded or claustrophobic.

Toilets were dotted around in the main buildings surrounding the festive i.e Leeds City Museum, Leed’s Library and The Light. I found The Wetherspoons by the main marquee also had easily accessible toilets.

Looking to charge your phones? There were no specific charging points, so I would suggest carrying a power brick with some charge or plugging in a restaurant/fast food outlet.

There were 100s of volunteers all wearing bright red Thought Bubble t-shirts at every entrance and exit as well as dispersed throughout the festival grounds. All were incredibly helpful and really knew what they were doing!

I have to say, Thought Bubble was without a doubt the most well organized convention/festival I have attended. All involved should be very pleased with how it came together and I will absolutely be in attendance next year!

Everyone was having a great time. There were a few cosplayers, not as many as I have seen at other cons.

One great thing about Thought Bubble is the amount of families in attendance!

Being free for under 12s is a brilliant idea. I saw a family dressed as Marko, Lana and Hazel and it was absolutely beautiful!

Take cash. Take snacks and a drink for whilst you are pursuing all the goodies, and just get stuck in! Chat to the exhibitors and the amazing people in attendance!

Heather Tins – Founder of The Valkyries