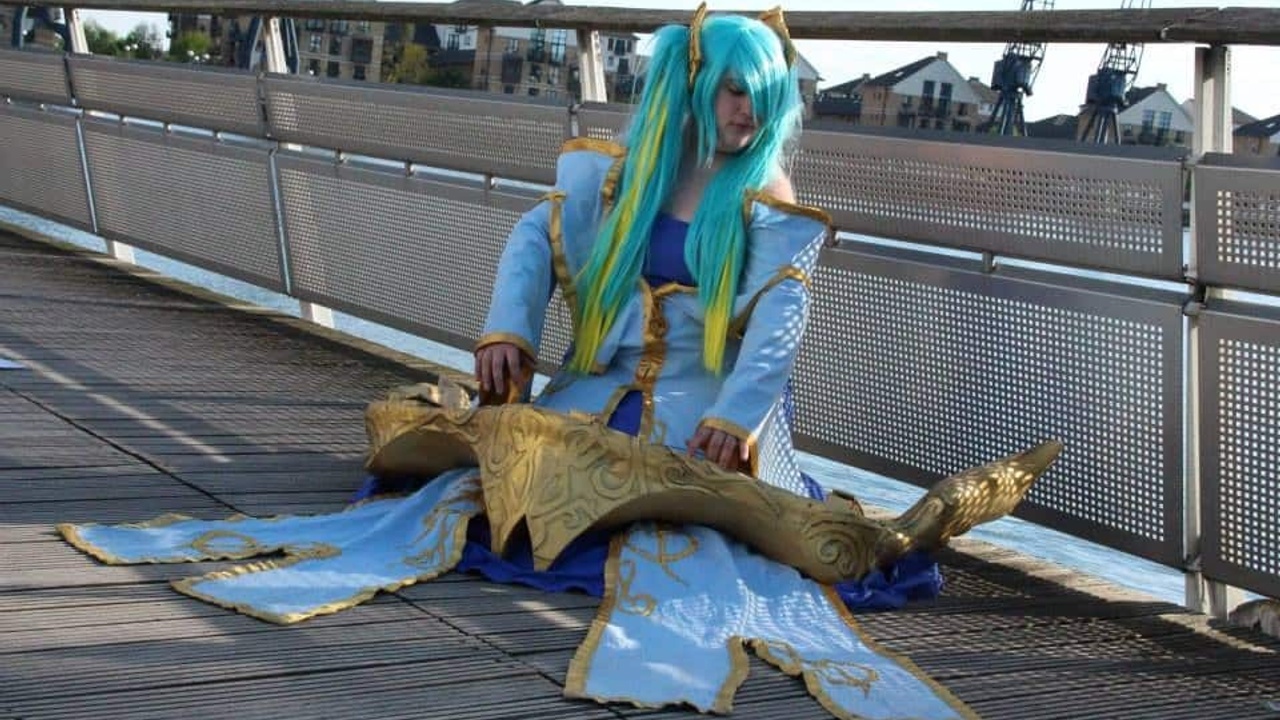 Have you ever seen ‘crazy skillz enters all the masquerade’s cosplay’ and scoffed at it like a bad, untouchable smell?

If so, you are doing cosplay wrong and here’s why...

What if I told you these skills are obtainable, it just takes a bit of practice?

We've teamed up with Costume and Play to give you an exclusive uncut version of 'Crazy Skillz' cosplayer Luna (otherwise known as one third of Fantail Cosplay.)

What was your first costume and what were your struggles?

My first ever Cosplay was actually shop bought, I however didn’t have the right boots or wig and I really didn’t think this was a problem. It wasn’t until I first started cosplaying. Peer pressure from a friend made me want to try to perfect my Cosplay, she always put me down about how I looked in costume, even though she didn't dress up herself.

I made my second Cosplay, but again, being spoken down to and told it wasn’t good enough. I had a few technical difficulties with wings, I couldn’t figure out how to make them and money was tight so Shun’ou from Bleach hasn't hasn't made it into a convention.

It wasn’t until my third Cosplay (Elite Canthan Armour from GuildWars) when I had realized characters I love - I would have to create myself, or buy and modify, did I finally take a Cosplay I made to a convention. I had so many struggles, mostly the collar and pattern making as it was an unusual shape, and I still hadn’t looked into wigs at this point in Cosplay either, cutting my own hair to suit the character, my staff was huge and a struggle to take to the con, but I did it, Head held high with my staff made from chicken wire and paper mache!

Can you walk us through what you choose to focus on to ‘get good’ at cosplay?

I think realistically I focused mainly on trying to make the costume as accurate to my references as possible, no matter what it took, or how I made it, and improving on my own skills each time. Even now I still draw and break down parts of the costume before I even look at materials or buying anything for my Cosplay. For instance lets take my Aion Spiritmaster. She has 7ft wings, her gemstones glow and her armour has shiny fabric aspects. I drew on paper each element, the wings, her ring above her head, the patterns and markings within her outfit took screen shots from the game as I was playing the Character to get a feel for her and the way the fabric flows.

I would then go to my fabric store with my references and drawings to get a good idea of the materials I can buy and what would suit. Nothing beats being able to see the fabric in motion. I have even taken a video before, the shop assistant looked very confused but loved the idea. Doing this also helped me learn fabric types, and I soon learnt that when the internet says “don’t use satin or cheap polycotton for Cosplay it’s so noob” they can actually be very wrong. My Sylvari won first place in the Masquerade along side silantres Necromancer, and I used basic Craft foam, cardboard and cheap polycotton! I learnt a lot, I feel, from just trying to focus on trying to improve myself each time and trying to make it as accurate to my references. I even learnt the start of electronics and the use of LED’s and all these things come with time and practice.

During my time as a cosplayer I have also received advice from others who have had similar experiences, I always find it good to listen to this constructive criticism. My Aion electronics kept falling apart and had several moments they just wouldn’t light up. Thanks to an older con goer who gave me advice to get more secure and tighter connections during our conversation, this hasn‘t happened since. Cosplayers like that really make my day! It’s advice like this that I think really helps. I try to encourage positive Criticism within Cosplay to help myself and others improve our skills. Id rather one constructive comment than a thousand comments that say “Nice Cosplay”  because at the end of the day I’m just trying to improve upon myself. I love the fact people like it, but I also love those inputs to help me grow.

Do you ever get self conscious or feel your skills aren’t good enough and why?

My boyfriend will tell you he is constantly telling me “NUNS” Its our little saying it means “Not Useless, Not Stupid” I will always put myself down over my Cosplay, especially if something doesn’t go right or doesn’t goe how I feel it should. For instance Worbla. it’s the biggest named Thermo plastic out there  popular and expensive. I will admit I am not the best person to use it, no matter how I try I can’t seem to get it right, I burn my fingers I get bubbles, it warps, my primers never work.

I beat myself up about it all the time telling myself that I’m stupid because I cant do something that another big named cosplayer with 100k likes on Facebook can. It didn’t help I read on an online tutorial “You are bad and shouldn’t be able to use Worbla if you cant do this!” there’s so many places online that put you down if you don’t have that skill instantly. But you never will unless you try.

People need to know that Just because you’re good at something and use a material just because the other person can’t use it as good as you, that instantly means they can’t, you aren’t their mother you aren’t a law enforcer for Cosplay, Cosplay is for anyone and anyone can use what they want. My example for this, I saw an AMAZING Blitzcrank Cosplay from League of Legends, it looked like the real thing. 100% cardboard and just yellow paint. You wouldn’t have believed it they even made the mechanics from card and rubber bands it was amazing!

I think now its become a lot harder to be proud and confident with your cosplays because of peer pressure and social media. You wont get as much people look at you if you don’t have those picture perfect photoshoots on your page or use the most popular material or have many likes. I think realistically people need to forget about that side of Cosplay and focus on having fun, which after all is what Cosplay is really about.

Why do you enjoy putting cosplay together?

Cosplay to me is a big creative outlet, I’ve always been into craft and art, I even went to college and University doing Art and Graphic Courses. it’s a great outlet and keeps your mind off things you just don’t really want to think about. It gets my mind thinking and the creative juices flowing. And at the end of the day you have something to be proud of and say “hey I made this” Nothing feels better. After taking time out of Cosplay because of life I am so eager to get back in explore areas I’ve only touched on before and create something I am so passionate and excited about. That feeling is really something I can not describe, it’s an experience, one everyone should give a go no matter their skill level.

Why do you enjoy entering masquerades?

I do, and I don’t. To me it is a double edge sword. After nearly fainting twice backstage I still do it when I get a chance. I get stage freight mostly because I feel there are thousands of eyes judging me, when really they aren’t, there’s only 1 or 2 people who really don’t matter. I love it because it is an experience, and I get to have fun in character on stage, something I would never get a change of doing elsewhere, there is such an adrenaline rush when you first step out into the light that I can’t really explain, you have to experience it.

I have had bad feedback from my Sylvari, Posts again on the internet “eww whats that big fat pink thing” “urgh that didn’t deserve to win” and “HAHAHA! FAT CONDOM!” It crushed me. My friends spent weeks picking me up after I found out, but I remembered there are millions of people in the world, and some just are cruel, the ones that matter when it comes to the Masquerade, are myself, my friends and the Judges, nothing more. Anyone can hide behind a screen and say nasty things, but I don’t know who they are, they don’t know who I am, and they’re judging me on my personal looks not my costume, not who I am and not how much work I put into my cosplay. It doesn’t matter where you go in the world, there will always be someone like that. So you ignore that and press on with the good and the constructive.

If we dream of making cosplay a true, free art of expression, if we’re going to make cosplay a safe space, ANY (and I really do mean any) kind of cosplay needs to go back to being okay again without quick cast judgements made. In certain circumstances I agree various ‘types’ of cosplay need to have rules and boundaries - BUT we shouldn’t rule out anything entirely. - Luna, Fantail Cosplay