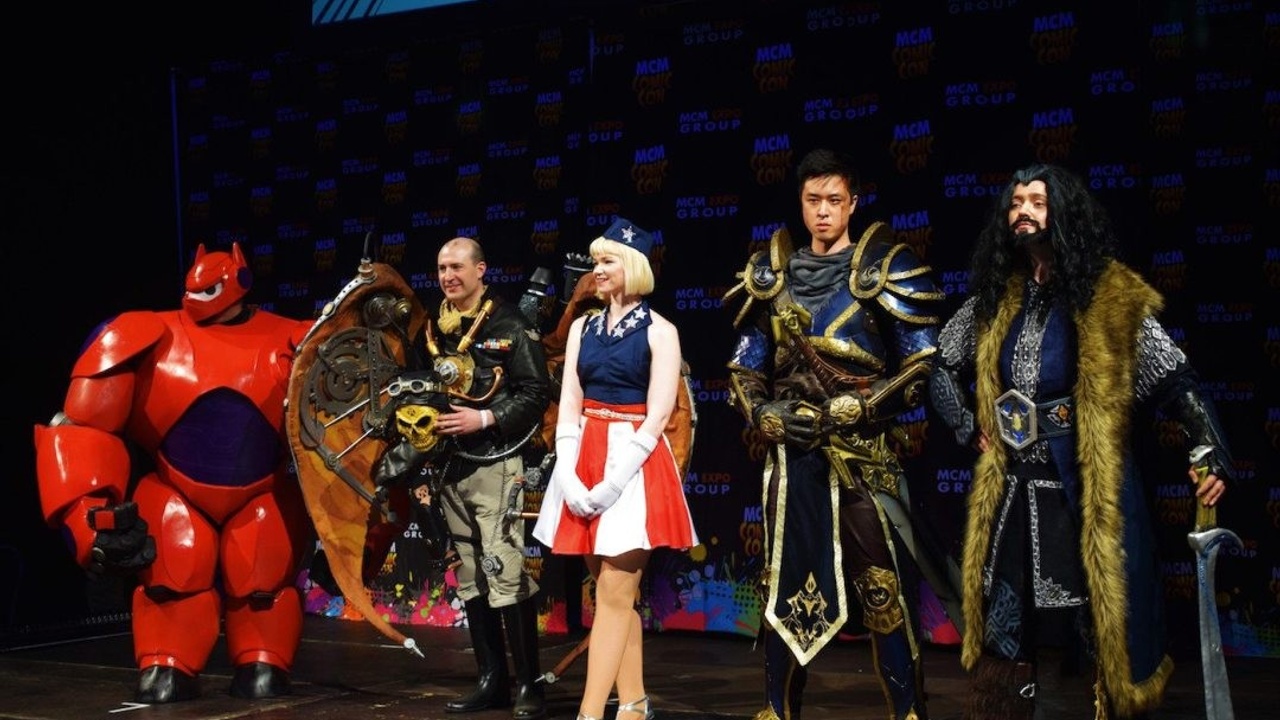 What is MCM Comic Con?

Taking up all of the Excel Centre, MCM London has grown to 180,000 attendees over the course of the three days.

MCM Comic Con is a UK-wide brand of conventions. They have one every month in a different city in the UK and Ireland and are a force of geekiness.

MCM Central was recently acquired by ReedPOP who put on a crazy number of events around the world including PAX, Twitchcon and Comic Cons of all kinds. We don’t yet know what this means for the future of MCM and will update this guide as required.

MCM London is held at the Excel Centre, Royal Victoria Dock, 1 Western Gateway, London E16 1XL. Warning, this is Zone 3 and there’s not much around there. Very easy to get to if the Docklands Light Railway is running, otherwise you’re looking at buses/taxis/driving. Plan your trip ahead of time.

It has plenty of facilities and even houses an escape room in the basement and up until March 2019 Avengers S.T.A.T.I.O.N.

What does it cost?

May 2019 ticket prices for MCM London Comic Con are:

You can bring along two children aged 10 or under with any ticket.

Is there an App for that?

There sure is, and if ReedPOP’s other events (PAX East and EGX Rezzed) are anything to go by it’ll be REALLY handy to plan and keep track of the panels, sessions, and events you want to see.

Get you maps, live updates, more info on guests, panels, exhibitors and more.

London May 2018 may be the first time they’ve used it, so let’s see how it fares . It’s different to the other ReedPOP apps but we don’t yet know if it’s merely a cosmetic difference or built on a different platform.

You can take food and drink into Excel and I recommend that you do. The prices are steep and the queues at peak times (Saturday 12-2)  can be up to an hour at the franchise outlets which include Subway, Upper Crust, River Cottage Deli and more – check the site for current outlets.

These are all in the central walkway which divides Excel into two (MCM takes up the whole centre) – there’s a bar, cashpoints, info, seating, toilets and more here too.

Excel also has its own food counters in some of the halls. Typical convention fare of hotdogs, burgers, chips, and also tea, coffee, soft drinks and beer.

One hall also features Japanese fare – this is often overlooked so worth checking out if the queues are epic – as is E16 Coffee in the central walkway – often ignored for the nearby Costa.

There is also a Tesco Express nearby, which is about a 20 minute round trip, plus factor in getting back into the show – worth knowing about.

Take ample cash. The cashpoints are notorious for breaking down and lines the length of the walkway are common on Saturday. Some vendors take cards, many don’t. All the in-house food outlets do.

Saturday is bloody busy. Between the peak hours of 12-3 do not expect to move around very freely. Worth checking out one of the seminars or shows on in one of the theatres, or heading out to the lawn where many of the amazing Cosplayers hang out.

Friday is by far the quietest day and if you want to avoid the crowds is well worth the day off. MCM also offer more expensive Priority Tickets which get you in 2 hours before General Entry – do note that people turn up early to be first in.

There are a few places to escape if it all gets a bit much.

Theatres – the theatres are generally large, dark and quiet (dependant on the event/panel/talk) with seating and space.

Upstairs – there is an upstairs space accessible from the main walkway; it has an additional theatre and is often overlooked. There’s space to sit and there are toilets up here, as well as a balcony overlooking the main walkway.

Outside – There is a large lawn outside and quieter walkways around the centre with views of the old London docks and the city itself in the distance. There is loud music and it can get a little raucous, with cosplayers, revellers, and people drinking into the early hours.

Meet and Greet Area – People only tend to come here if they have a meet and greet booked, so there’s usually plenty of space with people in orderly queues.

There is a lot of cosplay at MCM, from thrown together at the last minute to detailed work. Everyone’s here to have fun – there are naturally rules to what is allowed, check the site for most recent guidelines.

There is a cosplay masquerade on both Saturday and Sunday on the main stage – you need to register in advance to participate (anyone can watch).

If the worst happens and something breaks, there is a cosplay team on hand with glue guns, irons, sewing kits,  to fix you up (say hello from CfG to Charlotte and the team!).

Be aware it does get busy, and bigger cosplay will limit your speed massively on Saturday – if you need to be at the masquerade for your slot give yourself plenty of time.

Many cosplayers spend the day outside on the lawn – the temperature is cooler and there’s always a bit of a party atmosphere out there.

There are plenty of toilets, mostly on a different floor to the main show. Some get busy (the large basement toilets near the cloakroom and  carpark) some are very quiet (upstairs, or back of the hall near the Meet & Greet).

Paid cloakrooms at either end of the main walkway and downstairs near the carpark. They won’t take cameras/laptops. The most recent MCM London saw a whole additional cloakroom space opened – long queues but much more space available.

ChargeBox mobile phone charging points for all major brands are at the east and west information desks. But always take a good battery pack.

Where to get Help

Security roam the hall and are very present at the main entrances. MCM Stewards are also near any of the celebrity areas. Make note of where the help desk and Organiser’s Office are, they can help.

The Press Office can also help in a pinch – they are all lovely and will do what they can to help/point you in the right direction. *waves at Annie, David, Trav et al.*

Though if you have attended a con in the US you should temper your expectations.

Excel is a particularly soulless venue with not much nearby (London is notoriously difficult to get a huge venue for this type of event) and the caliber of guests is really very good (recently Manu Bennet, Stefan Kapičić, Anthony Mackie, the Red Dwarf Crew, loads of artists, Warwick Davis, actors from Merlin, Sherlock, Babylon 5, Doctor Who… yet being across the pond means less chance of the really big names.

Despite that MCM is a great day, or even weekend out!

The panels and talks are excellent, (Mr Weebl was a highlight for me) and they have dipped their toe in the water of looking at panels covering more accessibility and diversity issues, with London Gaymers hosting a panel on being LGBTQIA+ in the gaming industry.

Marvel were heavily involved this year with displays of costumes from Thor Ragnarok and Black Panther, props from Guardians of the Galaxy, Avengers, and lots of photo opportunities.

The shows included Graeme of Thrones, which is a win from me and I’d like to see more of this, even if ticketed and in the evening.

The team do a phenomenal job and things will undoubtedly change and grow with ReedPOP.

There are opportunities for more varied social events and a more diverse range of topics (CfG is involved in some of those discussions), and they are exploring this.

Yes. Take water and money. Be aware of the busy times. Make a list. Expect to make it to a fraction of those things because OH LOOK AT THAT COSTUME/GAME/RPG  BOOK/ ZELDA BAG/FOOD…

We love MCM Comic Con and look forward to the next one in May 2019 – yep, they do this twice a year in London.