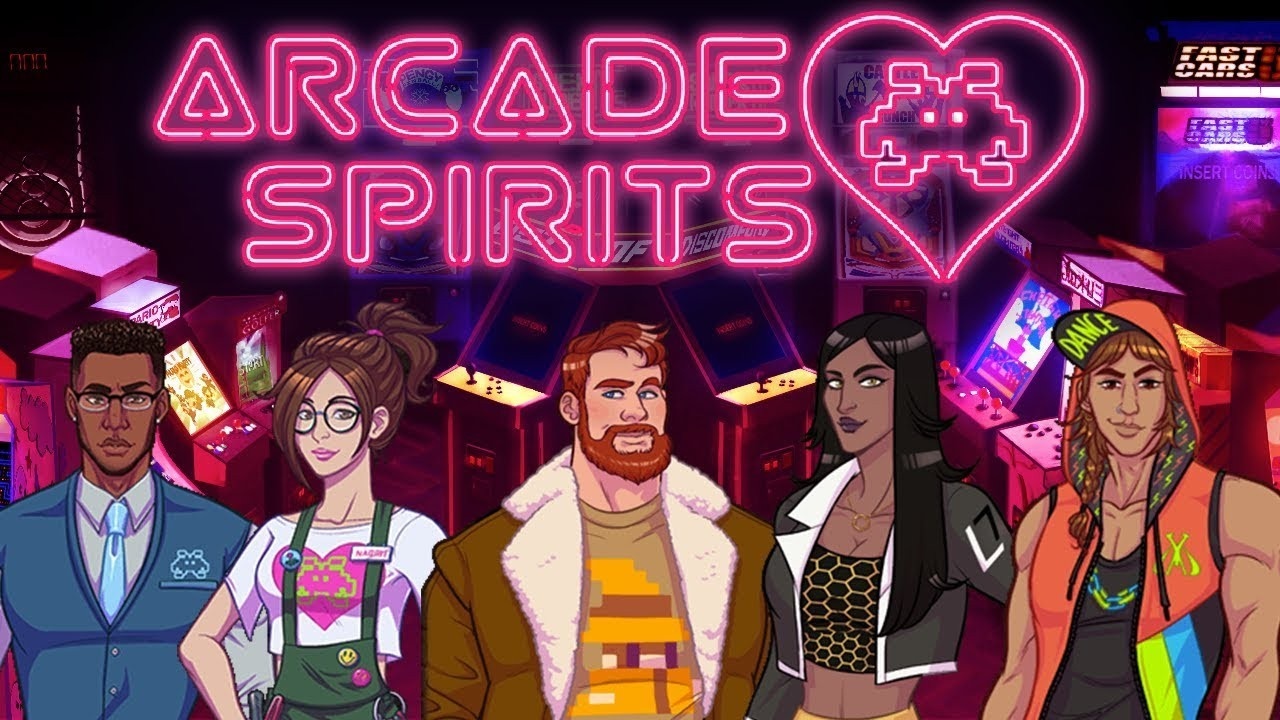 This sassy game of life and choices lifted my (arcade) spirits.

Arcade Spirits is a romantic visual novel that follows an alternative timeline where the 1983 video game crash never occurred. It’s 20XX and you’ve just started a new job at the Funplex game arcade. Who will you meet along the way? Will you find the romance you’re seeking?

Warning: Screenshots and spoilers for Chapter One

The highly personalisable character at the start is very inclusive, you can pick exact colour variations of skin and eyes (would have liked to change all the clothes, not just the jumper though), and pronoun of your choice.

The beginning got me: Low spirit. Reason to employ: Hope.

It starts as your character has just lost their job as a lifeguard (“whatever the era, kiddies peeing in pools is a constant”), and your roommate tells you to download an app to help you sort out your life (a bit close to home, thanks…)

It’s in the future, but… “20xx is pretty much what you’d expect… non-flying cars. Smartphones. Pro-gamer celebs”.

The dystopian ‘future’ is very slick, with a wise-cracking, film noir style in night-time, watercolour tones. Against that backdrop, the anime-like characters and voices are cute, chirpy and larger than life – overly cute, but not overly annoying!

The soundtrack is funky as you go through the story, although it quickly got repetitive. One clever “please enjoy this recorded music” while waiting on the app – I wanted more of those, they could have more varied sounds and music snippets.

As I progressed past the starting scene, I chose more reckless, bold moves to grab opportunities – in response, the game insulted me by saying I had “low standards” haha. It really forced me out of my own head and into an alternate universe… one where I didn’t overthink things, and where life was what you made it. I started the game in a low mood, and by the end of chapter one I was in high spirits about life, chance encounters and repercussions. I wish in real life I got a +1 star every time I said “what the hell, go for it, without question” – was this bringing out my secret desires, my dream life? Did I play in a way my life was lacking? Whatever the answer, my heart was really warmed when the result of my reckless choices became: “weeks later… turns out that was the best impulsive decision I ever made”.

Once I made a few choices and got settled into the new job at the arcade, however, I found a period of a little too much dialogue and no choices, so less of the game aspect and just like reading a novel. [ “It IS a visual novel” – Robin ]

In the arcade, we find out my character (you can read your character’s thoughts, and I think making choices based on those thoughts determines how happy you are) hasn’t been inside an arcade for 15 years – and yet, recognises all the games. The explanation contains lots of clever game history references, as if the video game crash of 1983 never happened.

Considering esports are relatively new, it’s a nod to the future when the game ‘Fist of Discomfort’ has been ‘the staple of the esports scene for 8 years’ – a hybrid of real time strategy and brawler beat ‘em up. QueenBee sets up equipment to stream live from the arcade – and every gamer mentions the arcade’s atmosphere is better than playing on their lonesome at home. It’s a valid point.

We also learn, later on, that the reason the character hasn’t been in an arcade for 15 years, is because he was the new kid, moved around a lot, didn’t make many friends – he learned to accept his lot in life, and give up hope.

The point of the game, in a roundabout way, seems to be to bring back that hope. And it did, for me, in real life.

When you are faced with choices – each has a different icon, and at the end of each chapter you see how well you scored per icon (guts, happiness) and per person, how well you get on with each character you meet. It’s a clever way to represent scores while allowing you completely free rein to live your life – these scores get more complicated further into the game, when you navigate politics and how well you stand up for each character, or help someone out, or flirt while potentially making someone else jealous or making you drop the ball at work!

But of course, we get to play the classic real life multiple choice game: the job interview. And it’s the most unconventional job interview ever, for example this is possibly the most important job interview question I will ever be asked:

“What assets do you bring to the team… during the Inevitable Zombie Apocalypse?”

Anyone knew an electronics engineer in the 80s or 90s, filling the house with “the smell of burning copper and plastic” and surrounded by cathode rays and green circuits? I did – my dad! And when we meet Naomi, the arcade games fixer-upper, we get an explanation on how arcade games work – so I feel like I learned something along the way. And it made me miss the atmosphere of the arcades, and made me entertain applying to work in one… but then, when a 5 year old’s birthday party hits the arcade, it reminded me why I might not enjoy it so much…

The narrative is full of clever references to game history, anime, real life events and more. I get the future being year 20XX but I don’t know why they referred to the “storm of 198x” – we all know it was 1987.

We meet a day trader who pulls out £3k to cover it – the cost of the Moopy game itself. Not to take it, to leave it in the arcade, so he can exclusively play it whenever he wants. He’s aiming for the world’s high score – and while he’s wealthy, “if I was to be defined by a number, it’s this one”. I mean, what is more important really, income or a game’s high score? (I mean, you kinda need the income to reach the other, as this scene just proved. But still.)

There’s “more than just a job” vibes everywhere – everyone is chasing a dream. Every character is different, well thought-out and intriguing. While the job, and the game, is essentially choosing how to navigate larger-than-life, wacky customer service problems.

One scenario involves a moral dilemma – staff witness one kid stealing another kid’s prize tickets, and you get to decide what to do about it, including calling out Gavin (the manager) on why he did nothing. I chose to stand up for what’s right and call him out – and he was initially annoyed, but I was relieved when my sassy response gained +1 respect.

And you realise, in this job, your character is happy.

One of the most poetic lines from Gavin:

The app, IRIS, recommends going for this job based on cross-references across social media and online information – “this is your dream job!” And she said she was 99.97% sure of that.

Did AI know what was best for my character? If so, then was that really lying? Do the numbers matter? It’s an interesting philosophical dilemma about truth, lies and AI. And… Maybe we can never be sure of our decisions, so why not just go for things, anyway?

Chapter one was rounded off nicely, and took about 2 hours to play.

Chapter two? I’ll give you one clue, there’s an auction for games… screenshot below – you’ll just have to play the game for more 😉

Chapter Two: An auction of games

Arcade Spirits: A sassy game of life and choices

The plot thickens later in the game, and you have to decide who to trust and who returns after certain encounters. The first chapter was full of intriguing characters, clever references to history and sassy interactions. I really enjoyed it and would definitely recommend the game – get drawn into this visual novel almost immediately and let it lift your (arcade) spirits.

Amanda Leek
Founder at Pounce
Amanda Leek is a creative copywriter & digital marketer, and geeks out over books, cute animals and tabletop / card games. Known for re-learning her 30 life lessons, dancing, and playing Hearthstone into the night.